Solar Panels and Fun Facts About Them

Solar panels used to be well below most people’s radar.  As a rule, it was the hardcore environmentalist types that installed them, or on the other end of the spectrum, the only other people who could afford them were research labs.  And it used to be that solar panels were very bulky, and almost half a foot thick.  And now it’s not just companies and private individuals that are jumping on the solar bandwagon, but governments as well.  Look at Germany for example. 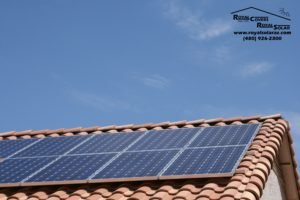 Germany used to use a lot of energy sources that were either coal powered plants, nuclear, or some other combination thereof, and there was little to no solar panel installation .  However, times have changed considerably.  In fact, 25% of Germany’s power is generated from renewable sources, of which 18% is solar.  This number is going to go up to 50% by 2050. Solar power can be used in a lot of ways. Did you know for example that you can cook your food by using a solar oven? It’s true and it is often a popular science fair exhibit. Solar power isn’t as new as you might think, either.

The ancient Greeks and Romans often situated their homes deliberately facing south so they could use the sun to heat their homes. If you think about it, magnifying glasses were one of the first attempts to use the sun’s power to start fires. And Albert Einstein even came up with a design for a photoelectric power node back in the day. Installing solar panels is just one more step in this history.

As to why people are considering solar panel installation, part of it is due to the laudable goal of energy independence. It’s estimated that by 2050, a lot of fossil fuels will be depleted to the point of exhaustion. Older nuclear power plants are dangerous and produce toxic waste, and as shown during the Chernobyl incident and Fukushima they can explode with devastating results.  And while thorium nuclear reactors show a considerable amount of promise, as do other fuel sources such as hydrogen.

Solar power isn’t for everywhere, of course.  Areas with a lot of clouds and overcast weather don’t do well with solar. However, technology is advancing considerably, as the demand for solar increases.  And modern solar panels are far more energy efficient than their predecessors are.   But there are several reasons to consider solar for your home or office including tax breaks, making a difference and more.  So give us a call and see if  solar panel installation is right for you.

This concludes part one of our series. for more solar panel information, be sure to read part two and part three as well. We invite you to learn more about our Solar Awnings as well. These are incredible money saving additions to your home or business!

Patio Covers in Arizona > Solar Panels and Fun Facts About Them