Solar Panels and Fun Facts About Them Part 2

Part two of our series on solar panel installation explores some more fun facts about them. 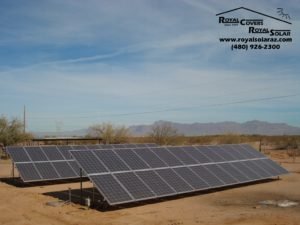 Even if you’re very old-fashioned, you may not know it yet, but you may already be using solar power.  Both Salt River Project and APS incorporate solar panels at some of their power plants across the valley.  Speaking of solar power plants, did you know there is a huge one out in California? It is impressive, however, there is an even bigger one being built in Arizona, as this article excerpt from Forbes shows:

The project, owned by NRG Energy NRG +1.21% and MidAmerican Solar, sits on 2,400 acres between Yuma and Phoenix. They hired Arizona-based First Solar FSLR +0.35% to build and operate the project, which also uses First Solar’s thin film solar panels that rely on a compound of cadmium-telluride to convert sunlight into electricity.Called Agua Caliente, the project will ship electricity to San Francisco-based Pacific Gas and Electric Co., which signed a 25-year purchase agreement. At maximum production, the project will generate enough electricity for about 230,000 homes. [READ MORE]

And if you think solar power is a passing fad, think again.  In fact demand for solar panels has for the first time in US history is exceeding supply.  All this in just a few short decades since they were released on the market in 1956!  Since there is increased competition in the solar industry, solar panels are also dropping quickly in price.  Giants such as First Solar are basing their headquarters in Arizona.  Solar power has been growing at an explosive rate, with 30% growth projected for the next decade or so.  It makes sense if you think about it, particularly in an environment like Arizona.

Arizona is obviously famous for its hot temperatures and the sun.  Arizona is very sunny and a lot of people like to come here particularly during the winter as our state  has about 300 days of sunshine a year.  And during the summer months, the daylight hours last from 5am until 8pm at night.  Solar panels are a lot more powerful than they used to be as well.  The older model solar panels didn’t generate a tenth of the power they do now.  But newer generation panels produce a lot of power with very little space.

So remember, you want to help the planet.  Recycle when you can, and reduce the strain on the power grid.  One way that you can help is to install solar panels today.

This concludes part two of our series. for more solar panel information, be sure to read part one and part three as well. We invite you to learn more about our Solar Awnings as well. These are incredible money saving additions to your home or business!