Shade sails are old technology.  Pirates used them, so did the Romans as well as the ancient Egyptians, however, while the technology is centuries old,  times have definitely changed. 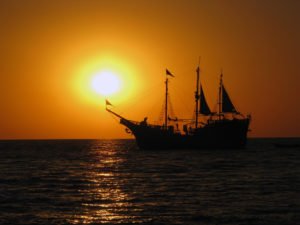 As yesterday was Talk Like a Pirate Day, (ARR) it may be time to talk about pirates and their influence on shade sails.  A shade sail used to be nothing but canvas.  In the pirate towns of Tortuga and Barbados, shade sails were once literally real sails: a few bits of canvas, torn from an old sail to provide shade from the scorching tropical sun of the Caribbean.  However, pirates weren’t the first to come up with the idea.

Ancient Rome had shade sails, as did Ancient Egypt.  In Rome, they were often used at villas, sometimes on galleys as well.  Ancient Egyptians used them in some of their homes as well as on their barques.  Arizona, much like Egypt, has a very hot summer temperature, and even we need shade.

The Age of Sail is past, and Rome and Egypt are part of history as well as museums, but the idea of installing shade sails has not disappeared.  Nowadays, however, the technology has gotten a lot more advanced.  Canvas is still used, however, it is chemically treated canvas.  As such, it is much less prone to rot and UV damage.  Just as a sunscreen protects you from sunburn and skin cancer, so does chemically treated canvas have some measure of protection from the sun as well.

And it’s a good thing too.  Arizona isn’t Egypt, Rome, nor the Caribbean.  Yet, like them, we need protection from the sun, and one of the best ways to protect ourselves to to seek a bit of shade.  With that said, why not install shade sails today?

Our next article will explore shade sails for business. Find the best AZ Patio Cover today with Royal Covers.