Shade sails are one method of controlling exposure to the sun.  And in a place like Arizona, that can be literally a lifesaver… 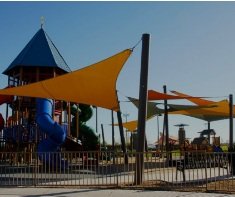 Each area of the country has its own safety hazards that people need to be aware of.  In the Gulf Coast states such as Florida and Louisiana, before you go swimming you may want to check for alligators.  If you live in San Francisco or the Pacific Northwest, sooner or later you’ll probably feel an earthquake.  If you live on the Eastern Seaboard or in Hawaii, you want to be careful of hurricanes or typhoons.  And if you live in the Phoenix area, you have to watch out for heat.  That’s where shade sails in Phoenix come in.

In 2010 alone, eighty people died of heat-related illness in Maricopa County.   Heat related illnesses include such things as minor conditions such as heat syncope, heat cramps, heat exhaustion, or heat stroke.  Heat illness or heat-related illness is due to heat exposure. n the minor side  heat cramps, heat syncope, and heat exhaustion as well as the more severe condition known as heat stroke.[1] Heat stroke is defined as a body temperature of greater than 40.6 °C (105.1 °F) due to environmental heat exposure with lack of thermoregulation. In short, without dropping your body temperature, or without hydration, you can literally be cooked to death by the Arizona heat.  Shade sails help to reduce direct sunlight exposure., which in turn reduce heat exposure. Also see our Equinox Pergola systems!

Uses of a Shade Sail

Your children want to go play on the playground equipment.  Slight problem.  The slide has a temperature of 120 degrees which is more than enough to cause burns to unprotected skin.  It can also help with shading a patio or pool area.  If you install a install a shade sail in Phoenix, while not a panacea, it can greatly reduce heat exposure.